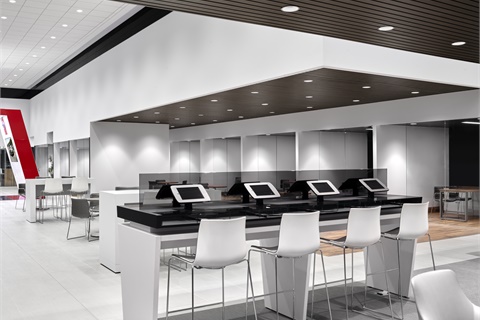 ATLANTA — Asbury Automotive Group Inc. announced the grand opening of its newest dealership, Nalley Nissan of Atlanta. The new location, which employs a no-haggle sales structure, is the first to feature the OEM's Nissan Retail Environment Design Initiative, or NREDI 2.0.

The new design, according to the manufacturer, brings both visual and technical upgrades to all aspects of the dealership. One of the focal points is a center station equipped with tablets customers can use to search the dealership's inventory, view both the interior and exterior of the vehicles, and check pricing.

The idea behind the station is to allow customers to look at what the store has to offer before beginning the process with a salesperson, said Doug Wells, the dealership's general manager.

Additionally, the 72,000-squre-foot location will feature a five-story car-display tower, over 800 parking spaces, 51 service bays, and 10 electric vehicle charging stations. Although the grand opening of the store was recently held on Sept. 29, the store officially began selling cars on Aug. 22.

"The dealership is on pace to more than double vehicle sales in its first month of operation," said Craig Monaghan, president and CEO of Asbury Automotive. "Nalley Nissan of Atlanta is a significant investment for Asbury due to its scope, importance, and uniqueness. This new facility offers both new- and used-car inventory, an exceptional service department and a sleek, modern, comfortable design that will enhance the time that our customers spend in the store."

The new dealership is the largest Nissan store in the Atlanta area, according to Nissan officials. It is also located in one of the highest traffic corridors in the Atlanta metro area, with approximately 250,000 cars driving by daily.

"Asbury Automotive Group's investment in the new Nalley Nissan of Atlanta will help Nissan build on its success in this market, which is consistently among our Top 10 markets for U.S. sales,” said Jose Muñoz, executive vice president of Nissan Motor Co. Ltd and chairman of Nissan North America.

During the first six months of 2016, Nissan accounted for 10% of Asbury’s brand mix, making it one of the four largest brands for the dealer group. The state of Georgia was also an important area for the dealer group. During the first six months of the year, sales in Georgia generated 18% of the group's revenue, the second largest percentage out of all states Asbury serves.