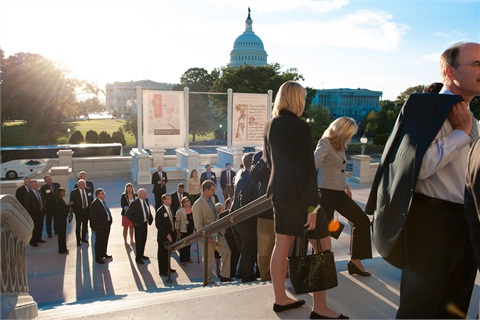 WASHINGTON, D.C. — More than 400 new-car dealers and dealer association executives from across the country traveled to the nation’s capital last week to urge lawmakers to support a new bipartisan bill that nullifies the Consumer Financial Protection Bureau’s “guidance” on auto lending.

House bill 5403, Reforming CFPB Indirect Auto Financing Guidance Act, is sponsored by Reps. Marlin Stutzman (R-Ind.) and Ed Perlmutter (D-Colo.). It already lists 50 cosponsors in the House since it was introduced on Sept. 8. The bill is a narrower version of H.R. 4811, which was reported out of the House Financial Services Committee by a bipartisan vote of 35-24 in June.

“[Dealers] are such an important part of the economy,” Rep. Stutzman told attendees at the 2014 National Automobile Dealers Association (NADA)’s Washington Conference on Sept. 10. “The CFPB is one of the most unaccountable agencies in the federal government.”

The Stutzman-Perlmutter bill requires the CFPB to provide a public comment period before reissuing any guidance on auto finance. The bill also requires transparency and accountability from the agency by making public any studies, data and analyses used to determine future auto finance guidance.

In remarks to his fellow dealers in the audience at the two-day legislative conference, Rep. Mike Kelly (R-Pa.), who played football at the University of Notre Dame, sounded every bit like a head coach talking to his team. In a passionate tone, he urged dealers to stand together, invite members of Congress to visit their dealerships and become more active in the political process by “getting good people elected.”

Kelly, a multifranchise dealer in Butler, Pa., added that there are a lot of marginal customers who benefit from dealer-assisted financing. He noted that officials from the CFPB do not understand the dealership business.

“[The Stutzman-Perlmutter bill] is incredibly important to us,” Kelly said.

In March 2013, the CFPB issued guidance regarding a dealer’s ability to discount interest rates offered to consumers to finance vehicle purchases. The CFPB claims that negotiated interest rates between dealers and their customers create a significant risk of unintentional “disparate impact” discrimination. But according to the NADA, there are a variety of legitimate business-related factors that can affect finance rates, such as beating a competing rate.

NADA Chairman Forrest McConnell highlighted the NADA’s recent legislative accomplishments and outlined the challenges ahead during the general session.

“In the past year, the NADA helped repeal outdated bills that were time-takers and money-wasters,” said McConnell, a Honda/Acura dealer in Montgomery, Ala. “We’ve led the charge against harmful tax reform proposals, including LIFO, heavy-duty truck excise taxes and broad recall legislation on rental vehicles.”