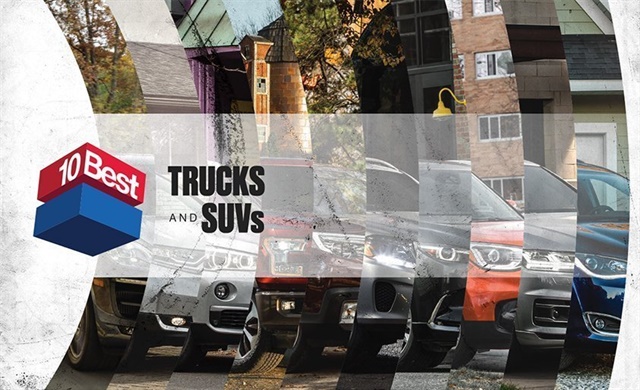 “The current Soul has maintained the funky charm of the first-generation model with design — inside and out— that manages to be both fresh and genuinely attractive, attributes that are often at odds.”

“Delivering excellence in the nascent subcompact-luxury-SUV segment is more difficult than one might think, thanks to the inherent difficulty in marrying the often disparate notions of luxury and small size. The BMW X1, however, is one baby luxo-ute that lives up to the badge on its hood.”

“The latest CR-V is the compact crossover SUV distilled to its near-perfect essence, blending engaging dynamics, master-class interior practicality, and a pleasing demeanor into a deeply satisfying whole, the magazine wrote. The CR-V has direct, eager steering and a compliant, well-controlled ride with exemplary body-motion discipline. No compact crossover so ably combines useful features, safety and convenience technologies, and storage solutions with driving satisfaction as does this Honda."

“Credit Porsche with focusing on the ‘sport’ part of ‘sport-utility vehicle.’ The 911-esque eyes surrounded by an aluminum hood arching majestically over large wheels and available six-piston front brake calipers give the Macan all the family resemblance it needs to snuggle with a garage full of sports cars.”

“There’s still no other mid-size SUV to which we’d rather entrust the diverse duties of family life. Morning drop-off? Check. Impress the in-laws? Sure. Date night? The car is better dressed than you are. And there’s no need to sell indulgences to foot the bill. Even in its swankiest guise, the CX-9 undercuts similarly equipped rivals by several thousand dollars.”

“Opting for the passenger comfort, luggage space, ground clearance, and, in some cases, three rows of seating that an SUV delivers works against the driving dynamics that car nerds — such as ourselves — hold so dear. Audi’s Q7, however, stands out among the crowd of decked-out family haulers as the one that best combines an ability to tackle practical jobs, be nerd-approved lively from behind the wheel, and boast luxury trimmings worthy of its price.”

“Are there other large SUVs that can tow more or carry more stuff or that cast bigger shadows? Of course, but none can match the GLS450’s ride, handling, or refinement, even though more than a few can brush up against its MSRP when comparably equipped. Roll in the model’s family-friendly functionality and its garage-friendly size, and it’s easy to see why the GLS450 nabs our 10Best award for large SUV.”

“Honda has never been afraid to go its own way, and the holistic approach it took in developing the Ridgeline has resulted in a vehicle that’s a compelling blend of pickup, SUV, and even minivan attributes. It’s sturdy enough for 90% of the tasks performed by 80% of the people, whether they know it (or will admit it) or not. The fact that this Honda is pleasant to live with on a daily basis simply sealed its victory.”

While the F-150 most definitely still drives like a pickup truck, the level of sophistication in its operation sets the bar for the class. With the availability of an updated 3.5-liter EcoBoost V-6 making up to 450 horsepower and 510 lb-ft of torque as well as a 10-speed automatic transmission, the 2017 F-150 is the most powerful and high-tech truck on sale today. And let’s not forget about the incredible Raptor, which for 2017 is all-new, lighter, and more powerful. That this amazingly capable beast is not even the most expensive F-150 trim and actually rides better than many other pickups is as stunning as its ability to bound over just about anything at speed.”

Nominees consist of all-new or significantly updated vehicles. For the inaugural 10Best Trucks and SUVs awards, every nameplate — more than 140 — was eligible. All vehicles must fall under the base-price cap of $80,000 and be on sale in January 2017. Full coverage of the Car and Driver 10Best Trucks and SUVs can be found online here. Additionally, the 10Best Cars awards can be found in the January issue, on newsstands now, and online here.