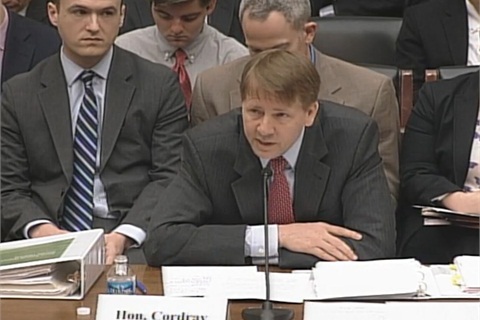 WASHINGTON, D.C. — In a hearing before the House Financial Services Committee on Wednesday, Richard Cordray, director of the Consumer Financial Protection Bureau (CFPB), announced that the agency will issue a white paper on how it uses the proxy method to determine the presence of discrimination in the indirect auto lending market.

The white paper is expected to be released later this summer, Cordray said during the bureau’s semi-annual report to the committee. He also noted that the bureau discussed at length in a recent webinar with the Federal Reserve its use of U.S. Census data and the Bayesian Improved Surname Geocoding (BISG) proxy method to determine whether minorities are paying higher rates for auto loans.

“… we and the Federal Reserve largely agree on the methodology presented to [the] industry,” Cordray said.

“We are working on a whitepaper on the proxy methodology in particular that we expect to have out later this summer,” he added. “We are continuing to try to respond on this issue.”

The National Automobile Dealers Association (NADA), however, was not satisfied by the bureau’s proposal. Following the hearing, the association responded to Cordray’s announcement. Officials said that while the association would welcome details regarding the auto lending guidance the bureau issued last March, it does not believe the white paper will answer all of the industry’s questions.

According to the guidance, lenders will be held responsible for discriminatory pricing resulting from policies that allow dealers to mark up interest rates as compensation for services rendered. The guidance is currently being threatened by H.R. 4811, a measure passed by the House Financial Services Committee this month and is now awaiting a vote by the full House of Representatives. If approved by Congress, the measure could rescind the bureau’s guidance.

“… Cordray only offered to provide information on one aspect of its analysis, the proxy methodology,” read a statement from the NADA, in part. “Since this would leave many unanswered questions regarding other critical aspects of the analysis, including how the bureau ensures that it is only comparing similarly situated customers, it reinforces the need for the Bureau Guidance Transparency Act, H.R. 4811, to increase CFPB transparency.”