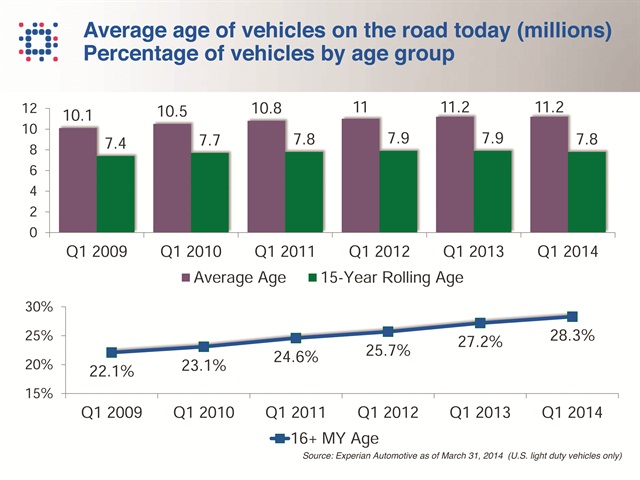 Dealers hoping to shorten consumer buying cycles may have to wait, as recent data from Experian Automotive and IHS Automotive show that consumers are still holding onto their cars. In fact, the percentage of older vehicles on the road has reached its highest level since 2009.

According to Experian’s most recent Automotive Market Trends analysis, vehicles predating the 2001 model year made up more than 28.3% of all vehicles on the road during the opening quarter of 2014, up from 22.1% six years earlier. The top model-year 2000 and older vehicles driven by consumers include the Ford F-150, Chevrolet Silverado 1500, Honda Accord, Toyota Camry, Ford Ranger and Honda Civic.

Experian’s findings mirror stats released by IHS Automotive in early June, which showed that the combined average age of all light vehicles on the road in the United States is 11.4 years — a count the firm predicts will remain steady through 2015. By 2017, however, that number is expected to grow to 11.5 years, and then to 11.7 years by 2019.

“In our history of tracking, we have seen a gradual increase in the average age of vehicles on the road,” said Mark Seng, director of aftermarket solutions and global aftermarket practice leader at IHS Automotive. “This year, we’re seeing somewhat of a plateau in the market, and we expect it to remain over the next few years … We attribute this to a number of factors, including the economy and the increasing quality of today’s automobiles.”

On a positive note, this rate of growth in the average age of vehicles on the road appears to be slowing vs. the previous five years. The firm attributed the slowing pace to the substantial increase in new-vehicle sales. In fact, IHS Automotive forecasts that the volume of vehicles that are zero-to-five years old will increase by 32% over the next five years, while vehicles between six and 11 years old will decline by 21%.

“Auto companies have been seeing the benefits from consumers coming back to market due to pent-up demand following the recession. However, it’s clear that more and more consumers continue to drive older model vehicles,” said Melinda Zabritski, Experian Automotive’s senior director of automotive credit. “While the growth in early model vehicles on the road is slowing, getting the most out of the vehicle they purchase still appears to be top of mind for consumers.”