CUDL Holds Onto No. 2 Spot in Auto Finance Rankings 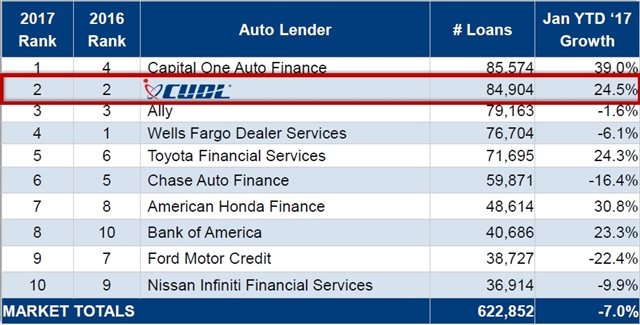 ONTARIO, Calif. — The more than 1,000 credit unions on CU Direct’s lending platforms maintained their No. 2 spot on Experian’s auto finance leaderboard in January. And with plateauing demand for new vehicles expected to drive up pre-owned sales, CUDL officials said the market is ripe for credit unions to reap further market share gains.

Credit unions originated 84,904 auto loans through CUDL’s lending platforms in January, a 24.5% increase from a year ago and about 600 originations shy of Capital One Auto Finance — the No. 1 finance source for the month, according to Experian. But credit union performance wasn’t the only focus of the technology provider’s March 9 webcast, as executive Michael Cochrum highlighted several opportunities and challenges facing credit unions this year.

“As vehicle sales plateau, there will be increased urgency for every opportunity to purchase and finance a vehicle,” said Cochrum, who serves as CUDL’s vice president of analytics and advisory services. “Where a dealer might have let a customer walk away because they had plenty of volume, they are going to try to please the customer by finding the car. … We have to be faster in responding to dealer partners when they have customers who are ready to buy.”

The executive’s message on the new side is that sales are beginning to slip, with sales growing by 32 basis points since 2011. “We still need to be aware that that part of the market is predicted to stay level over the next couple of years,” he said, noting the industry has all but absorbed the pent-up demand coming out of the recession.

It’s that situation that could negatively impact the pre-owned market, which has seen it sales growth rate ease to 1% over that same period. The belief is that vehicle OEMs will keep the pedal down on leasing, subvented financing and incentive spending in order to drive new vehicles off dealer lots. This, Cochrum said, will put pressure on used-vehicle and collateral values.

“When collateral values begin to decrease, we want to get as much of the collateral …” he said. The question, he added, is how the glut of used vehicles coming into the market as lease returns will impact pricing.

What’s clear is competition for market share will intensify in 2017. Last year, credit unions held a 23% share of the auto finance market. That’s up from a low of 17% in the last couple of years, Cochrum said. Banks and captive finance companies closed out the year with shares of 39% and 19%, respectively, he added.

“So credit unions have taken on market share faster in the last few months than they ever have in the past,” Cochrum said, noting that credit unions tend to play more in the low-risk credit spectrum. The problem, he added, is credit unions are underpricing loans in those tiers.

According to Experian’s December 2016 data, credit unions registered the lowest rates in almost every tier — about 50 to 80 basis points on loans made to customers with credit scores above 700. “We have room in the credit union world to increase our price and still be under bank competitors,” Cochrum added, noting that a 30 basis-point increase would still be a great price. “If there’s a 25 basis-point difference between you and [your] competitors, that’s a pretty good spread.”

His message to credit unions was that dealers need more than price. Faster response and funding times is what they really desire, Cochrum said. A focus on process will also allow credit unions to react quicker to changing market dynamics.

With real income growth of 1.3%, the concern is that salaries and income aren’t rising at the same rate as vehicle prices. That means the flood of vehicles entering the market will have a limited number of buyers, which puts downward pressure on vehicle values. It also means negative equity will continue to rise.

Cochrum said credit unions need to build loan-to-value risk into their pricing to account for those pressures. The executive also urged credit unions to monitor dealer practices, noting that a few fraudulent practices that became a problem during the downturn are beginning to reemerge.

One of those is powerbooking, where the finance manager adds nonexistent equipment to a vehicle description on a loan document to inflate the amount financed. Another is the so-called “repo close,” for which dealers encourage car buyers to let a vehicle be repossessed if they owe more than the vehicle is worth. The dealer then promises to finance a newer vehicle before the repossession appears on the customer’s credit report.

“We need to know these realities can be there and build these realities into our policies,” Cochrum said. “If you have independent agreements with dealers, make sure they cover these types of things.”

The executive also encouraged credit unions to review their marketing procedures, noting that finance are beginning to insert themselves earlier in the car-buying process. One such company is Capital One Auto Finance, whose Auto Navigator site allows car buyers to get prequalified for an auto loan. Chase Auto Finance, he added, is rolling out a similar site.

“We’ve seen some changes in the last couple of months, where lenders are now taking a role in that buying cycle,” he said. “We’ve been competing with lenders at the point of sale, at the finance desk, but we’re going to see lenders insert themselves earlier in the process.”

Cochrum added that marketing to millennials also needs to be part of those strategies. Citing Experian data, he said millennials lease 8.25% more often than all other buyers. The reason is affordability, but as the executive said, “Leasing isn’t the only way to create an affordable financing option.”

“You need to discuss ways of making vehicle financing more affordable,” he said. “We need to be considering how we’re going to interact [with them].”