No Customer, No Sale 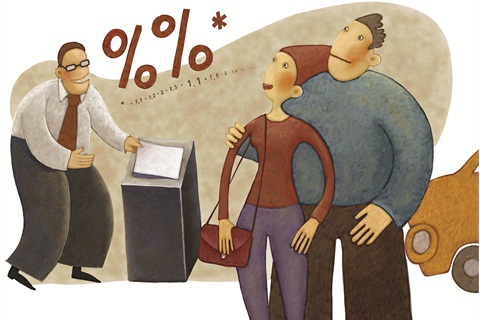 According to the Federal Reserve, interest rates for new auto purchases were at their lowest level last year in about 40 years. And as we all know, the men and women manning dealership F&I offices can usually secure rates below what the banks are charging. So why do some consumers still choose to pay higher interest rates by financing directly with their bank?

In April, the National Automobile Dealers Association said it expects auto finance terms to become slightly less favorable by the end of the year. Rates, according to Bankrate.com, are already inching up. In February, for instance, the site showed that average interest rates for a 60-month, new-car loan and a 36-month, used-car loan were 4.18% and 4.71%, respectively. In April, those averages rose to 4.21% and 4.78%.

Even if the NADA is right about interest rates, dealers will still be able to best the rates consumers can secure directly with their finance source. In fact, as the NADA reported several years ago, dealers saved consumers $21 billion between 2008 and 2010 on new-vehicle financing vs. the direct channel. So, again, why do some consumers opt against dealer financing?

Missed Opportunities
On the rare occasion, we’ll face customers who are so loyal to their bank or credit union that they don’t mind paying extra to do business with them. But for most car shoppers, interest rates dictate which finance source they choose to finance their vehicle purchase.

Based on my experience, the reason consumers opt against dealer financing is because they never met with the F&I manager and weren’t aware of the fabulous rates he or she could secure. And it’s too late for the F&I manager if the customer shows up at his or her office with a blank check from a bank or credit union, because there’s no way the customer is going back to his or her finance source to have another check cut for that service contract or Luster Glaze paint coating.

One of the things my firm looks at when working with dealerships is whether every customer is turned over (T.O.) to F&I at the time of sale. For stores with underperforming F&I departments, we find that the sales department is allowed to issue purchase orders to customers, who then leave the dealership and return a few days later with a check from their bank or credit union.

What’s unfortunate is the F&I manager, in most cases, could have secured more favorable terms if he or she just had a chance to meet with the customer. Instead, the F&I manager’s averages tumble and the divide between sales and F&I widens.

Just the Facts
The good news is the fix is simple: Sales must refer 100% of customers to F&I at the time of sale. The tricky part is implementing this process change, because this is a policy issue that needs to be supported and carried out by the general manager (GM) or dealer. And to get them onboard, you need to make a compelling case as to why they should care.

Let’s start with some facts: First, we know no lender will finance a vehicle without a purchase order. And as we also know, that purchase order must be correct, compliant and approved by management. And it goes without saying that the purchase order must be printed and professional looking. Well, who are the most qualified individuals in the dealership to do that? Yup, F&I managers.

So doesn’t it make sense that the general manager or dealer set a policy that every purchase order be generated in the F&I office before it leaves the dealership? Not only is the store protected, the F&I manager gets to see every deal before it sails down the street.

Will it be that easy? It should, but I know some of you out there work in stores where the sales department runs things the way it wants. If that’s the case, you have to give them an even more compelling reason to implement this policy.

One thing to keep in mind is asking for such a process change can get somewhat political, so seek the help of the agent who sells your products. Your lender representatives can also help. If you have a good relationship with either of them, ask them to present the report I’m about to explain. They can be very helpful in these situations.

Building a Case
So, for the next month, keep a log of every customer who wasn’t turned over to you at the time of sale. At the end of the month, multiply that total by the average dollars per finance deal (not per deal). What this equation will reveal is potential income lost because the sales department didn’t give you a shot at securing the customer’s financing:

Potential Income from those deals if financed: B x C =  Potential Lost Income in Dollars

If you take the time to keep track of customers who weren’t turned over to your office and report to management the impact that’s having on the dealership’s bottom line, you will get their attention. They may not react immediately, but those lost dollars you show them every month will eventually be too much to ignore.

See, what you’re showing your GM or dealer is there is a good dollar reason for 100% T.O. to F&I at the time of sale. You’re also showing them that you’re on top of everything going on in your department. But whatever you do, don’t sabotage yourself by showing emotion or debating a doubter. Remember, what you’re doing is not about you or anyone’s opinion. It is simply about net profit. So calmly show them the numbers. And don’t sell your findings, just report.

I once had a GM say to me after reviewing my report: “Yeah, but we don’t know how many of those people would have financed.” My response was this: “You’re right, and we never will. All we know for sure is that we lost whatever potential income was there and we’ll never get it back.”

Believe me, that line will drive them nuts. And sooner or later, they’ll do something about it. Just remember that every dealer and GM is different, but every one of them I’ve ever met wants to make more money. So give my approach a try. It works.

George Angus is the training director for Team One Research and Training, a company specializing in scientific, research-based program development and training. Email him at george.angus@bobit.com.