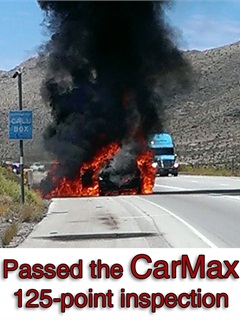 ROSEVILLE, Calif. — Protestors gathered outside a CarMax store here today to demand that the used-car retailer cease its practice of selling recalled vehicles. The protest was supported in part by Consumers for Auto Reliability and Safety (CARS), one of the 11 consumer groups that launched a petition in June to get the Federal Trade Commission (FTC) to investigate CarMax’s business practices.

CARS claims that, as of Sept. 29, the CarMax location in Roseville is offering more than a dozen recalled vehicles for sale with defects like “sticky gas pedals, faulty steering, window switches that can catch on fire, and air bags that may not inflate when needed in a crash,” according to a release on the organization’s website.

"CarMax is playing recalled car roulette with its customers' lives," said CARS President Rosemary Shahan in the release. CarMax promotes that it conducts a 125-plus point inspection on every vehicle, a claim CARS and Courage Campaign, a non-profit organization promoting the FTC petition, said constitutes false advertising. More than 25,000 people have signed the Courage Campaign petition requesting an FTC investigation into these allegations.

In May, Senator Hannah Beth Jackson (D-Santa Barbara) introduced Senate Bill 686, which would have made it illegal for used-vehicle retailers to sell used cars with open recalls issues in the state. The bill was killed in June. On a federal level, the National Highway Traffic Safety Administration (NHTSA) requires new-car dealers to fix recalled vehicles before they are sold, but it must be granted authority by Congress to require the same of used-car dealers.

In April, as part of the Grow America Act, the Obama Administration proposed the authority to require both used car dealers and rental car companies to fix recalled vehicles before they are sold or rented. Congress has yet to make the proposed change.

“Dealers have a legal obligation not to sell a new vehicle after they have been notified of the recall by the manufacturer until the defect has been remedied,” the NHSTA said in a statement emailed to F&I and Showroom. “The National Highway Traffic Safety Administration does not, however, have the legal authority to require used-car dealers or individual consumers to have recalled vehicles fixed prior to resale.”

Among the protestors in Roseville were CarMax customer Angela Davidson and her daughter Jasmine, who purchased a recalled 2010 Dodge Ram from the retailer’s Irvine, Calif., location on May 19. The Davidsons said the vehicle burst into flames on the freeway 11 days after the purchase.

"It would be a federal crime for CarMax to sell recalled cars like the Davidson's Dodge Ram to consumers if it were new," said Eddie Kurtz, political director of Courage Campaign, in a press release.

CarMax, which recorded second quarter revenues of $3.6 billion this year, told a legislative committee in Sacramento in June that manufacturers do not permit independent auto dealers to repair recalled vehicles. The company also has a policy in place in which customers must be given a form titled "Important Information Regarding Your Purchase – Manufacturer Recalls" before any sales document is presented.

“CarMax instructed the Davidsons, as we instruct all customers, to have any open recalls fixed with a manufacturer-authorized facility,” said CarMax in a statement to F&I and Showroom. “The Davidsons have reported to multiple media outlets and to the CarMax store that they took their vehicle to the manufacturer-authorized Chrysler dealer and had the open recalls addressed and closed out prior to the accident.

“CarMax has worked to help the Davidsons throughout this process,” the statement continued. “In addition to providing the Davidsons with a loaner vehicle after the accident, CarMax offered to repurchase the vehicle and reimburse the Davidsons for all out of pocket expenses. This offer has not been accepted.”