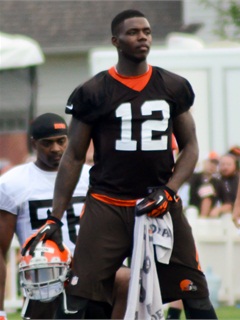 RANDOLPH, Ohio — Following his suspension from the NFL under the league's substance-abuse policy, wide receiver Josh Gordon needed a job. It looks like he's found one – working as a car salesman.

Next week, Gordon will report to the family-owned Sarchione Auto Group in Randolph, Ohio, a small town about 50 miles outside of Cleveland. Gordon led the NFL in receiving with the Cleveland Browns in 2013.

Gordon will be stationed on the sales floor, fielding inquiries and selling cars on the group's Ford and Chevrolet lots. Gordon will get the same training as any other salesperson.

“He’s ready to learn the business and he’s excited to be here,” said Alex Sarchione, the group's marketing manager. “He would like to have his own franchise someday.”

While sales would be part of his job, Gordon won’t have sales goals to meet and will also be teaming with the dealership to do local fundraisers for schools and charities. He will also work with the Wounded Warrior Project for veterans. The idea came about after a brainstorm in the Sarchione household between Alex and her husband John.

“My husband came up with the idea to connect with Josh and I contacted his agent to work out the details,” said Sarchione.

Gordon received his second suspension for violating the league’s substance-abuse policy, which drew harsher penalties. He was suspended for two games in 2013 for substance violations. In 2013, he earned his first Pro Bowl selection.