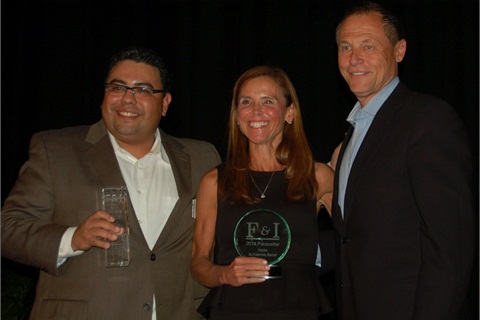 LAS VEGAS — At this week’s Industry Summit, F&I and Showroom named Vaden Automotive Group as its 2014 F&I Dealer of the Year. Accepting the award was Jane Vaden Thacher, who serves as the dealer principal for the Savannah, Ga.-based operation.

In its 14th year, the F&I Dealer of the Year award, sponsored by The Warranty Group, is handed out annually to an operation with a highly profitable F&I department that demonstrates a commitment to regulatory compliance and customer satisfaction. This year’s field of finalists, which the magazine refers to as F&I Pacesetters, included operations from Arizona, Colorado, Georgia, Oklahoma and Texas.

“What an impressive group of dealer operations,” said Gregory Arroyo, editorial director for F&I and Showroom magazine. “Each of them boasts active management teams, compensation plans that balance performance with customer satisfaction, and multilayered compliance procedures. They really made it difficult to single out just one operation as this year’s F&I Dealer of the Year.”

Vaden Automotive Group was founded in 1968 by the late Dan Vaden, a former TIME Dealer of the Year. Since his passing in December 2010, the eight-store group has been led by his daughter Jane, who previously served as the group’s F&I director.

The group’s F&I department averages well north of $1,200 per copy, with service contracts, GAP and prepaid maintenance leading the way with acceptance rates approaching 60%, 57% and 33%, respectively.

As for compliance, all F&I managers are required to sign a code of conduct that outlines what is expected in terms of behavior and adherence to compliance, with the group’s F&I director tracking each producer’s 30-day CSI score. Results are then discussed during a weekly Tuesday-morning conference call with all F&I personnel.

“My dad did business one way when he had just one store, and that was doing it the right way,” Thacher said. “We call it the Vaden way.”

The group, which holds Chevrolet, Cadillac, Buick, GMC, Nissan and Volkswagen franchises, will be featured on the cover of F&I and Showroom’s November 2014 issue.