Retail sales at the beginning of 2014 were hampered by extreme weather conditions, but spring has brought a string of record-setting months, as sales have increased on a year-over-year basis for each of the first six months of 2014 (on a selling-day adjusted basis), according to data collected by the Power Information Network (PIN) from J.D. Power.

A sales forecast developed jointly by J.D. Power and LMC Automotive found that total sales (including sales to fleet buyers) through the first half of 2014 are expected to reach 8.1 million, a 4% increase over the same period in 2013.

“New-vehicle demand in the first half of 2014 has been robust, as evidenced by both strong sales and record transaction prices,” said Thomas King, vice president of PIN. “Looking forward, we expect that strong sales momentum to carry into the second half of the year.”

Transaction prices for the first six months of 2014 are at record levels, averaging $29,630, an increase from $28,880 a year ago. Consumer expenditures on new vehicles through the first half of the year also are at a record high of $194 billion, a $14 billion dollar increase from the same period in 2013.

Automakers and lenders are helping buyers afford these higher prices by providing longer loan term options. Loans with term of at least 72 months account for 31.8% of retail sales in the first half of 2014, up from 30.2% in 2013.

Leasing is also a popular option for consumers, now accounting for 26% of retail sales, compared with 23.8% for the first half of 2013. 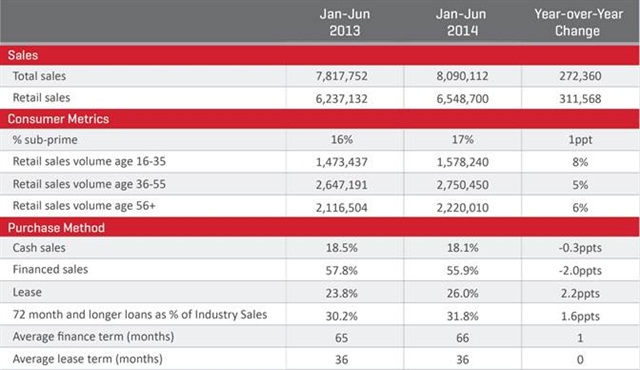