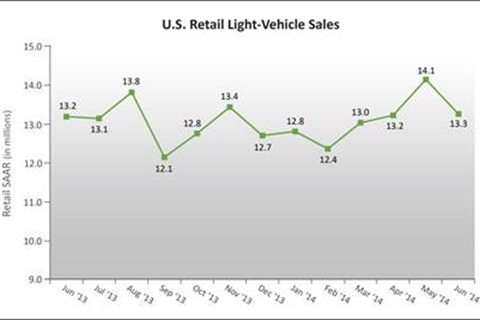 Retail light-vehicle sales in June 2014 are projected to reach 1.1 million units, 6% higher than in June 2013 on a selling-day adjusted basis.

"It's important to recognize that June sales are being heavily influenced by a quirk of the industry sales calendar," said John Humphrey, senior vice president of the global automotive practice at J.D. Power.

The June 2014 sales month includes just 24 selling days, compared with 26 selling days in June 2013. Humphrey noted that due to this difference in the sales reporting calendar in 2014, it makes sense to evaluate May and June sales in combination.

"When combined, May and June retail sales are expected to be up 7.2%, compared with May and June 2013, which underscores the continued positive trajectory in growth and overall health of the industry," said Humphrey.

Total light-vehicle sales in June 2014 are expected to approach 1.4 million units, a 5% increase from June 2013. The pace of fleet volume growth continues to be lower than retail, with a 1% increase year over year, accounting for 19% of total sales in June.

Supporting volume above 16 million units is a 55% increase in new-model activity in 2014 vs. 2013. Virtually every vehicle segment has fresh models in dealer showrooms, with activity in the small premium car and SUV segments accounting for more than 10% of all new models.

New-vehicle production in North America through May has increased by 175,000 vehicles (2.5%), compared with the same timeframe in 2013. Automakers in May 2014 built 1.5 million vehicles, a 4% increase from April 2014 and a 1.5% jump from May 2013. LMC Automotive said it expects that third quarter production will come in at slightly more than 4.1 million vehicles, the highest third quarter level on record. LMC Automotive also maintained its 2014 North American production forecast at 16.6 million units, a 3% increase from 2013.

Strong sales in May helped manufacturers continue to clear inventory, as days’ supply fell to 60 days from 69 days and inventory decreased by 125,000 units. Every major manufacturer with the exception of Daimler has been able to reduce or maintain inventory levels from April.

“The U.S. auto market is arguably in the best position and health it has been in since well before the Great Recession,” said Jeff Schuster, senior vice president of forecasting at LMC Automotive. “Sales are robust and stabilizing above a 16-million-unit pace and are back in balance with production levels, keeping inventory in check. While GDP growth remains below ideal levels, the auto market continues to be instrumental in helping drive the economy.”

1Figures cited for June 2014 are forecasted based on the first 17 selling days of the month.