CHICAGO — In the fourth quarter, auto loan debt per borrower increased for the 11th straight quarter, rising 4.4% from the year-ago period to $16,769, according to TransUnion. On a quarterly basis, auto loan debt was up from $16,685 in third quarter 2013.

"While we observed an uptick in auto loan delinquencies, there are reasons to believe they will continue to remain relatively low in the near future," said Pete Turek, vice president of automotive in TransUnion's financial services business unit. "First, while auto loan originations are increasing at a rapid pace, the percentage of nonprime accounts remains low. In fact, the percentage of nonprime borrowers for all auto loan accounts was lower in the [fourth quarter] than it was the previous year"

The subprime delinquency rate — consumers with a VantageScore of less than 641 on a scale of 501-990 — increased from 5.73% in the fourth quarter 2012 to 6.12%. "While this is nearly a 7% yearly increase, it should be noted that subprime delinquencies remain below levels we observed during the recession," Turek noted. 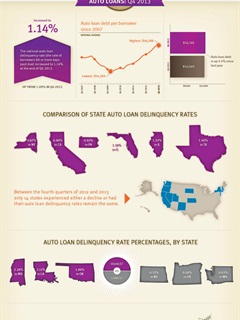 "We expect share of nonprime, higher risk loan originations to continue trending upward due to the growth of competitors in this segment," Turek noted.

TransUnion is forecasting delinquency rates to drop to 1.02% in the opening quarter of 2014 due to historic seasonality associated with auto financing. "Auto delinquencies tend to drop in the first quarter of the year, and we expect current market conditions will place downward pressure on delinquencies," said Turek.